On most nights, Ryerson’s men’s basketball team looks good. On other nights, they look great. On Wednesday night, they looked unstoppable.

The Rams handed the University of Toronto Blues a devastating 104-68 loss to become the first recipients of the BIA Cup, a trophy awarded to the winning team in the crosstown matchup.

Ryerson garnered their 10th consecutive win and did so through balanced scoring, effective bench play and domination on the glass. Head coach Roy Rana’s squad exploded for a season high in points and seems to be hitting their stride at just the right time.

Guard Aaron Best played like he was in another stratosphere in the first half, knocking down trey after trey and grabbing boards like his life depended on it. When Best pulls up for a three, it’s a shock to see it not drop. 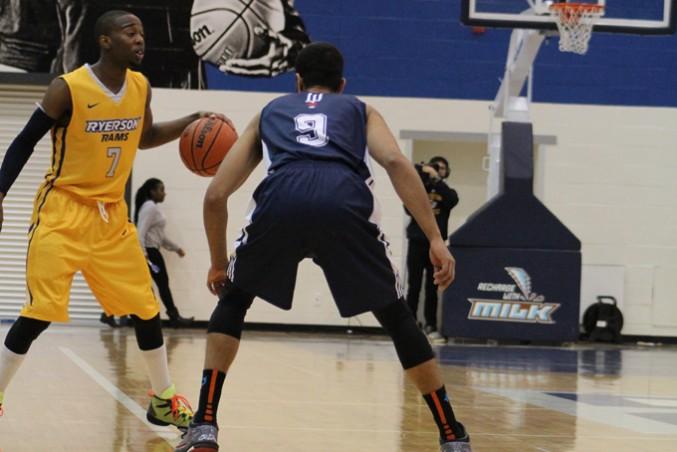 Point guard Jahmal Jones was as reliable as ever in the win, delivering 21 points, 12 assists and six rebounds on 77.80 per cent shooting. Jones evoked oohs and ahs with his speed and court vision, and as always was joyous in victory.

“We wore my favourite colour [jerseys] today, yellow, so everything just felt good,” Jones said with a grin.

In the past two games, Jones is averaging 21.5 points, 11 assists and five steals, numbers that add support to his argument as one of the top guards in the country. Sharing the ball has been the key contributor to the team’s success, says Jones, and that all begins when he brings the ball up.

“When we play unselfishly we’re a very good team, and it starts with me,” Jones said. “If I can get guys open [looks] and let guys feel good about the game, it speaks volumes.”

Depth was an advantage for Ryerson, with the bench scoring 33 points in roughly 77 man-minutes played. Forward JV Mukama played only five minutes in the first half, but he came to life in the second half scoring all 11 of his points, making a strong impression as the team heads towards the playoffs.

“Every player [who] stepped on the floor came ready,” said Mukama, who was held scoreless on Feb. 7 against Lakehead University.

After the win against Lakehead, Rana was upset by his team’s lack of consistency quarter to quarter, but likely had no such concerns against the Varsity Blues. Ryerson scored 52 points and gave up only 34 in each half. It doesn’t get much more consistent than that.

Despite their winning ways, Rana still sees room for improvement.

“We haven’t reached our peak because we haven’t been tested the way we need to be yet,” Rana said. “Hopefully that will be in the OUA Four or along our playoff route.”

As for the BIA Cup, the Rams appreciate the gesture and acknowledge the contributions that made it possible, but have their eyes set on the big prize– The CIS National Championship.

“To be honest, I have no idea what the BIA Cup is,” Mukama said. “But I guess it matters.”

The Rams will close out their season on Feb. 20 when they host the Queen’s Gaels. Tip off is at 8 p.m.