Many people still refer to rhythmic gymnastics as “the one with the ribbon where they dance to music.”

But during Toronto’s 2015 Pan Am Games, the sport was showcased under a different light and the Canadian public was able to learn more about it.

At the games, the Canadian rhythmic gymnastics team won two bronze medals in front of the home crowd, but even before fans flooded the stands, the team had two silver medals and a bronze from the 2011 Pan Am Games in Mexico.

Rhythmic gymnastic success is relatively new to Canada, and Anjelika Reznik has been at the forefront of it.

Most of the competitions sold out as national fascination and curiosity with the sport appeared to rise. Reznik and her twin sister Victoria, both fourth-year politics and governance students, were partly responsible for that.

“Surprisingly, after the Toronto Pan Am Games, many people are aware of my sport,” said Reznik. “If I [talked about it] five years ago, no one would know … [but] our events were sold out, and they had to open up more seating.”

She was a part of the historic team that placed 17th at the 2011 FIG World Championships, which resulted in them becoming the first- ever Canadian group to qualify for the 2012 Olympic Games in London.

The Olympics is a dream for most athletes, one that Reznik can proudly say she lived. Through this experience, she learned about the importance of representing her country and the pressure that comes along with performing on some of the biggest stages in the sport.

“I was representing Canada, so you have all that pressure, and if you make a mistake you’re letting your country down,” she said. “You learn to use that pressure in a good way and eventually you get used to it.”

She said she found comfort in the close bonds formed between her and her teammates, despite the intense weight on her shoulders. This sense of comfort helped her perform her best as the team placed 11th at the London Olympic Games.

“You’re with your friends that you train everyday with, and it was a little circle of support,” said Reznik.

But after falling one spot short of qualifying for the 2016 Olympics in Rio, the team disbanded and Reznik retired from group competition. She said it was unfortunate that after all their hard work in training, it resulted in a disappointingly “unlucky” loss. However, the gymnast wasn’t ready to step off the mat completely just yet.

After her team disbanded, Reznik competed individually in the 2016 Rhythmic Elite Ontario Championships and ranked 1st in level 9, one of the highest levels of the sport.

Last year, Reznik also decided to try out for the Ryerson cheerleading team where she was able to help earn a spot competing in the Canadian National Cheer & Dance Championship this coming April. 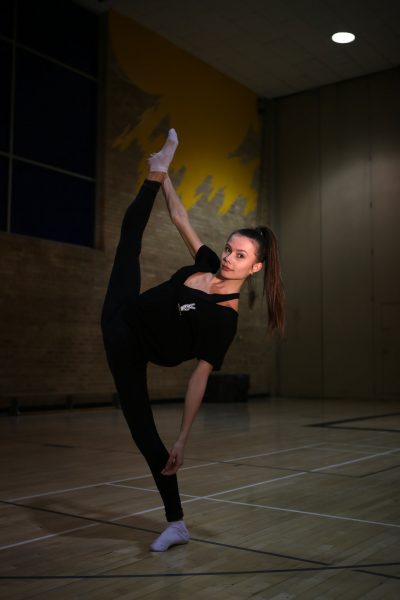 Despite her departure from the sport she loves, cheerleading and gymnastics have glaring similarities; the outfits, the team comradery, the music and the art of the performance.

An Olympic gymnast is also almost too perfect a candidate for cheerleading; a seasoned athlete who has succeeded at the highest level of their former sport is what every team hopes for in a new addition.

Although cheerleading was new to her, being part of a team was something she had grown familiar with. Reznik started off at the bottom of the pyramid as a part of the team’s base group, but after one of her coaches’ saw her Instagram, she soared to a new position and became a flyer—the cheerleader on the top of the pyramid or stunt and is lifted into the air by the bases, something Reznik wasn’t used to.

In rhythmic gymnastics they are not allowed to perform any flips, while in cheerleading, flipping is permitted along with greater heights.

“[It was] more of a challenge of facing my fears, I had to pick up everything that girls were doing for years in a day,” she said.

Fortunately, she was able to acclimatize to a new sport and become a member of a winning team that will compete for a national championship, which she said is “a lot more fun just because it’s a lot more motivating … Individually, it’s kind of hard to motivate yourself.”

Reznik suggested her sister also join the team, but she declined and decided to focus on her studies. They both plan to use their education to improve rhythmic gymnastics in Canada.

Preparing for previous competition often meant travelling abroad to countries like Spain and Bulgaria in order to have access to better resources. By comparison, before the Olympics, they would train in a “rusty warehouse” or “Korean churches.”

The Pan Am Games were one of the few times they had adequate training facilities on home soil in Toronto, since high-quality training spaces were built in anticipation of the games.

One country in particular that has dominated this sport is Russia. The country has invested a lot of money into the success of its athletes. They have a national training centre, known as the Novogorsk Centre, that is the main base for 32 sports including rhythmic gymnastics, basketball, figure skating and volleyball. It allows 250 athletes, coaches and doctors to train, eat, sleep and rehabilitate.

After being part of the first Canadian team to ever qualify for the Olympics, Reznik has seen some growth in Canada, but they’re still far behind in funding and public awareness compared to their Russian competitors. Reznik plans to use her education to change the climate of rhythmic gymnastics in Canada and wants to eventually be involved with the Olympic committee.

An Olympic gymnast is also almost too perfect a candidate for cheerleading; a seasoned athlete who has succeeded at the highest level of their former sport is what every team hopes for in a new addition.

“I really want to contribute my politics [expertise] into sport,” she said. “Specifically, I want to develop sports in Canada, bring more attention and get more support for athletes in general,” said Reznik on her future after graduation. 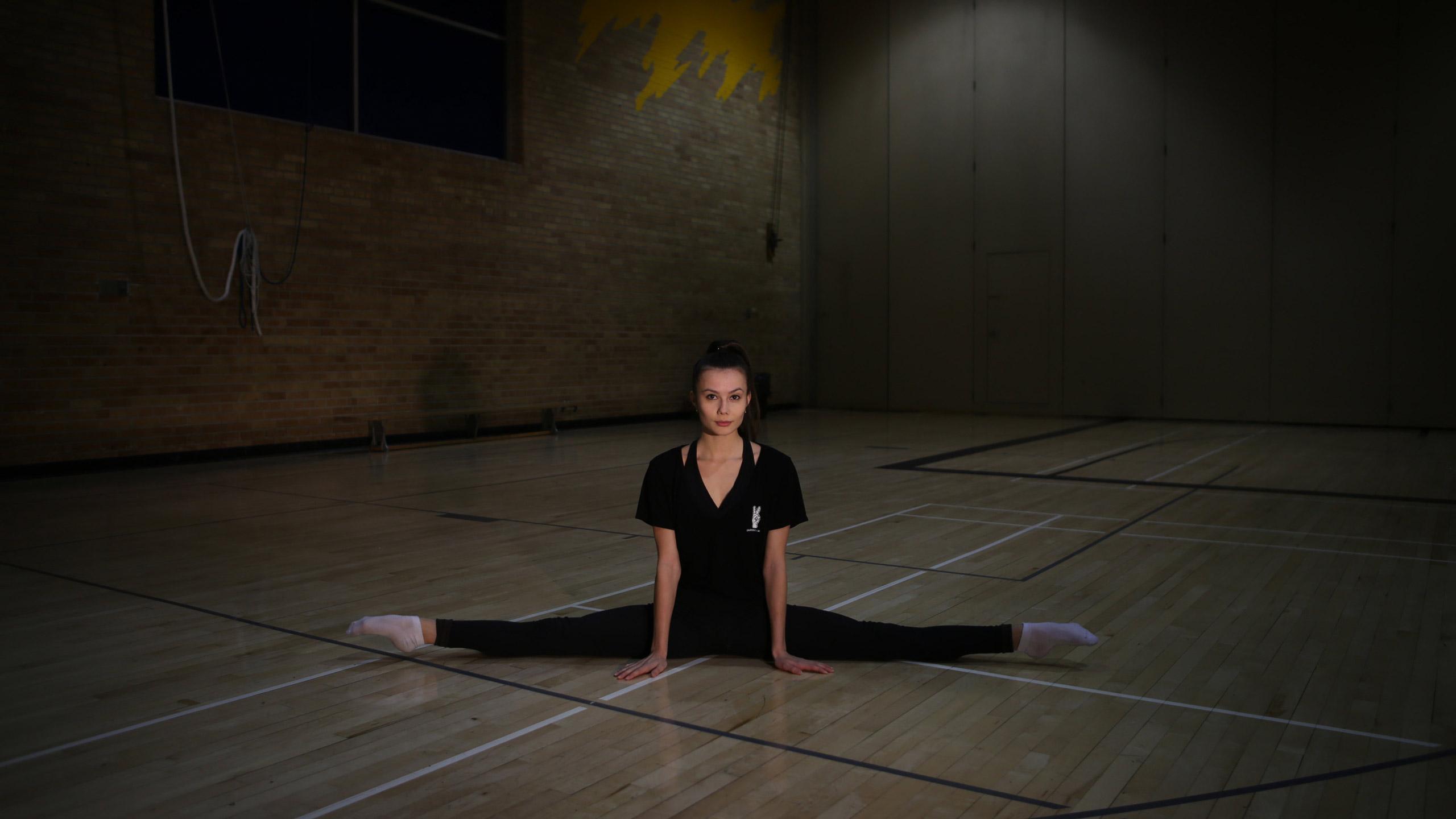 The Spreading Opportunities (SIPO) foundation, a non- profit organization dedicated to helping prepare young adults who are graduating to find a career, sought to collaborate with the Reznik sisters. As brand ambassadors, the duo’s job is to share their story of perseverance.

“They invite kids to perform their talents, and the whole point is to find your passion and pursue it, and me and my sister found our passion through gymnastics,” she said.

Although Reznik is now cheerleading and her sister has retired, they still describe rhythmic gymnastics as “their” sport.

One quote Reznik lives by is “you are the creator of your own reality,” which she gained during her time as a gymnast. While competing she became infatuated with meditation, and used her positive thinking to affect those around her.

“It really helped me through my training, it got to a point where I was known to be as the positive one on the team who would bring up the group,” she said.

As she inspired her teammates, it became a part of her. Negativity attracts negative things is what she says: a testament to the lessons learned as an Olympic athlete.