El-Chanti, who was just recently named U Sports’ athlete of the week, scored the game’s only goal off a corner kick in the 65th minute, curving it into the net to give the Rams a 1-0 win.

His heroics are becoming common practice, after also scoring the Rams’ first goal in a 4-0 win against the Trent Excalibur and a goal in injury time against the UOIT Ridgebacks in a 3-2 victory last weekend.

Saturday’s win keeps Ryerson securely in first place in the OUA East, tied with the Toronto Varsity Blues with a 6-0-1 record, and comfortably ahead of the Ravens who sit in third.

It was a better result for the Rams, after finishing in a 3-3 tie against the Ravens in their first matchup of the season earlier in the month. 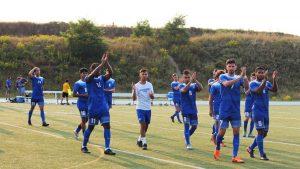 Ryerson’s defence was strong against Carleton on Saturday, especially through a close call in the 32nd minute, when keeper Praveen Ahilan scooped up the ball as the Ravens tried to push their way through their backline.

It also took a while for the Rams to crack the Ravens’ defence. They had their chances, and a promising one in the 39th minute, when a throw-in from the Rams’ Andrew Dias went straight to El-Chanti’s feet, who was unable to finish near goal.

The first half ended in a draw, but El-Chanti made sure the second half didn’t produce the same results, putting one in the back of the net for his ninth point of the season, the third most in U Sports.

The remaining minutes were filled with heightened aggression, with two yellow cards apiece for each team, as the Ravens finished the day with four in total.

The Rams remained strong throughout the rest of game, trying for a couple more goals in the 78th and 81st minutes through free kicks, but ending with a final score of 1-0.

Up Next: The Rams face off against the UOIT Ridgebacks on Sunday at 3:15 p.m. at Vaso’s Field. It’ll prepare them for their matchup against the Toronto Varsity Blues on Sept. 23, where they plan on breaking their first place tie.