Rookie Diary is a series in which first-year Rams bring us along for their rookie season at Ryerson.

Greg DiTomaso, defenseman for the Rams men’s hockey team, is nearly two months into his first semester at Ryerson.

After spending last year with the St. Catharines Falcons in the Greater Ontario Junior Hockey League, he’s getting used to his new team along with life in the city. The Etobicoke native has played a key role in the Rams’ solid start, helping them reach a 4-2-0 record to start the 2017-18 season.

In this follow-up Rookie Diary, DiTomaso discusses his time at Ryerson, how he balances hockey and academics, and what has stood out most so far in his first season as a Ram.

Q: How has the adjustment been for life at Ryerson?

DiTomaso: It’s been good, but it has been an adjustment so far. My schedule is very busy and it’s hard at times to balance school work with hockey and a social life.

How has your experience been with the Rams thus far?

It’s been great, the guys make it enjoyable to come to the rink every day. It’s a tight team and everyone is helping each other out regardless of whether it is school or hockey.

What moment on the ice stood out to you the most?

Our last home game; it was the five-year anniversary of the MAC and it was a great atmosphere because of the crowd that came out that night. Really cool experience.

What was the weirdest thing you have seen on campus so far?

I haven’t seen too many weird things, but there has been good energy on campus and it’s been chill seeing tons of advertising of free drinks, shirts and stuff. 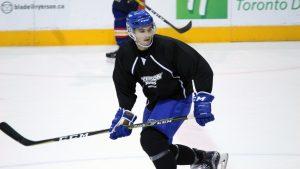 How are you handling school and hockey responsibilities so far?

It was tough at the beginning since you really need to manage your time especially with four hours of study hall required a week. But it’s been exciting so far and I can’t wait to do this for the next four years.

Have you gotten a chance to be with your family since you came to Ryerson?

Yes. Luckily I live at home with my family which is nice to come home every night to be with them.

I know it’s still early in your first year, but where do you see yourself after you graduate: in hockey or in business?

I hope it is hockey. But if not, I will have my business degree which is important to me because hockey isn’t forever.

This interview has been edited for length and clarity.