After 30 minutes of debating the approval of the agenda, the Ryerson Students’ Union (RSU) semi-annual general meeting (SAGM) on Nov. 29 lost quorum (the amount of people needed in the room to vote) and literally nothing got done.

“I’m just frustrated at how immature the board was being amongst themselves at the front,” Madeline Sialtsis, fourth-year aerospace engineering student said.

Sialtsis added that RSU executives were “bickering” amongst themselves at the front, which is why students left the meeting.

“I’m sure that there are motions in [the agenda] that are really important. Students definitely should get to vote on them,” Sialtsis said.

Former RSU president Rajean Hoilett has asked that executives not use their mics in front of them, and use the mic in the middle of the room like everyone else. Executives have agreed that they will follow to this rule.

RSU president Susanne Nyaga said she wants to see if the RSU can schedule an emergency general meeting, so that students can “discuss and that the space isn’t actually taken away from them.”

The SAGM started off on a light note, with Nyaga’s welcoming remarks, thanking students for showing up. RSU vice-president equity Camryn Harlick then made a land acknowledgement and an equity statement. Anti-harassment officer Corey Scott then asked students to be kind to one another and to listen intently.

Next, the chairperson for the meeting, Nicole Dionisio, made welcoming remarks. The SAGM was not chaired by RSU president Susanne Nyaga, which is how it went at almost every RSU board meeting this semester. Dionisio is a former Scarborough Campus Students’ Union executive and a current executive for the Toronto Youth Cabinet. 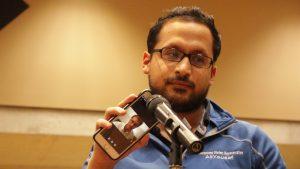 “We are debating issues today, not personalities,” Dionisio said during her opening remarks.

RSU vice-president operations Ali Yousaf then questioned why there was no motion to approve the chair in the meeting agenda. Nyaga responded saying there is no precedent to ratify a chair on the agenda for an SAGM.

RSU board member and Senate representative Razi Syed put forward a motion to amend the agenda, asking that two motions on the agenda be moved up. The first motion was to implement a ranked-ballot “single transferable vote” (STV) electoral system for the upcoming RSU winter election. The second motion was for slates and endorsements from fellow candidates be banned in all future RSU elections and for candidates who are found to be running in slates or endorsing fellow candidates to be disqualified.

The room then voted on the amendment for the two motions to be moved up in the agenda–a majority voted in favour.

However, the chair ruled that the amendment was out of order.

“Those two motions that have been moved up have been ruled out of order. They are motions to change bylaws, which have their own set of rules. They require their own bylaw amendment, in order to be passed and changed in the bylaws,” Dionisi said.

The remainder of the meeting was centred around this ruling, which was challenged by Yousaf, vice-president student life & events Lauren Emberson and vice-president education Daniel Lis— who phoned in.

“This is the first opportunity that we actually have had to have these discussions with the general membership this year,” Emberson said.

Yousaf brought his phone up to the microphone, allowing Lis to chime in, but this only rose questions from students who were wondering why he was unable to attend the meeting. Former RSU president Rajean Hoilett even asked whether Lis was registered for the meeting and if he was allowed speaker rights if he was not present.

A motion was then put forward for Lis to have speaking rights and an overwhelming majority voted in favour.

Lis is present via phone. Hoilett says he doesn’t know who this person is—if it even is Lis. “This could be my mom..” Hoilett said.

Lis told the room that the reason he was not able to attend the SAGM was because the rescheduling of the SAGM conflicted with his schedule, as he was at a meeting in Ottawa “advocating for student issues.”

Regardless, the ruling of the chair–for the amendment to the agenda be ruled out of order–was still upheld. Dionisio said this was because it goes against the current RSU bylaws. 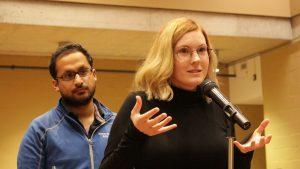 The room then lost quorum and Dionisio called for a 20-minute recess.

After the recess, they were still unable to reach quorum so the meeting was adjourned. This ultimately left the entire agenda untouched.

Nyaga said that although students were given the space to speak about whether they agreed or disagreed with the ruling of the chair, she was unhappy with how the SAGM went.