On a tiny street in the heart of downtown Toronto, an old Victorian-style house is nestled on the corner of Gould and Bond streets. Some may call O’Keefe a piece of the city’s history, but to 32 students, this is their home.

The students who established a deep connection to the house and its traditions were shocked after discovering earlier this week that they are the last cohort of students to live at the O’Keefe House. I am one of those students.

“O’Keefe is like a family and it’s really sad that future students aren’t going to get a chance to experience it,” said Connor Mazier, a first-year student arts and contemporary student and O’Keefe resident. 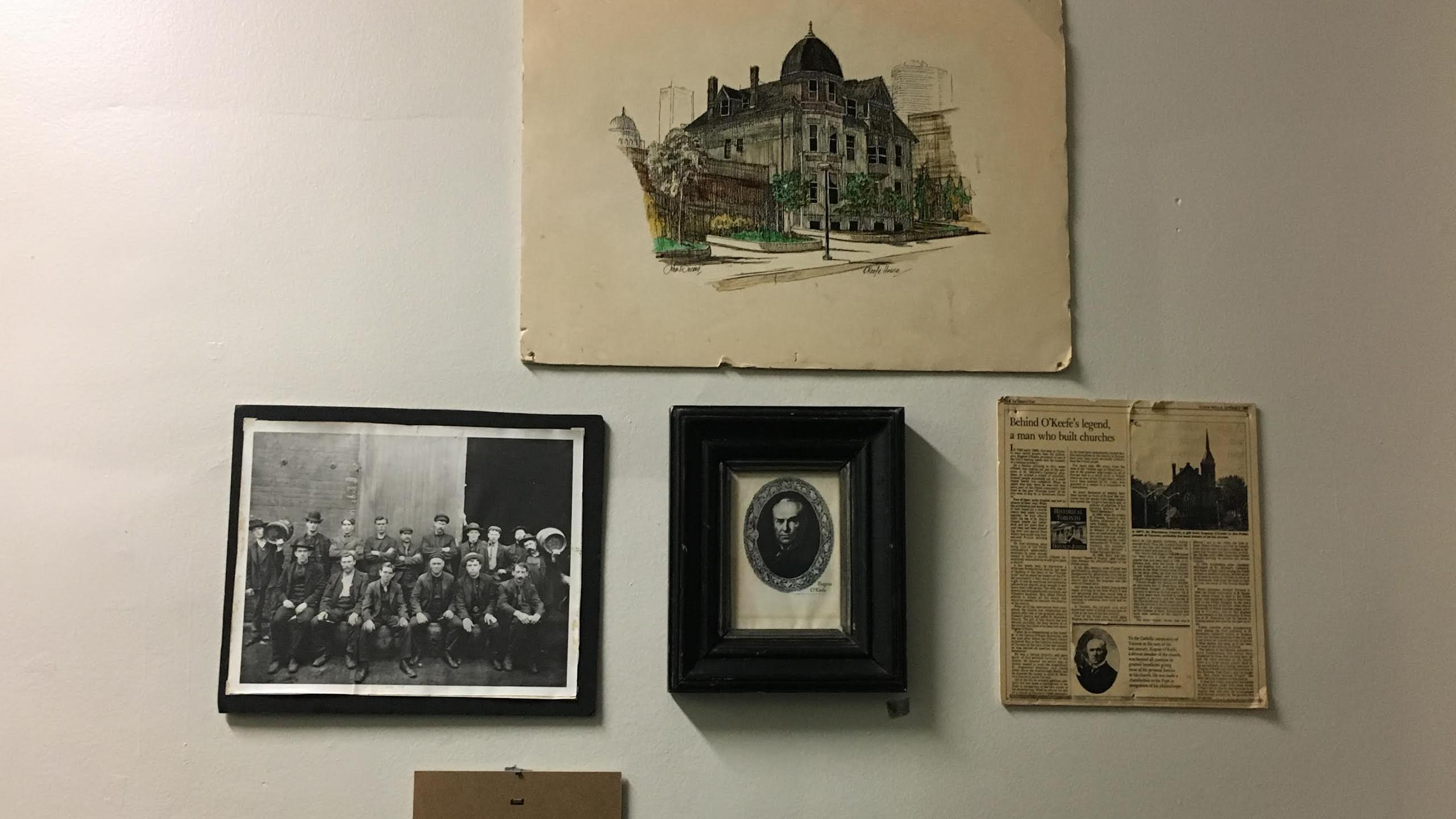 Located at 137 Bond Street, O’Keefe House has served as a residence building at Ryerson for more than 54 years.

The building was previously owned in 1879 by Eugene O’Keefe, who purchased the house because of its convenient location—directly across the street from the brewery he owned.

O’Keefe owned the house until 1913, when he died in the second-floor bedroom.

“O’Keefe house traditions are a huge part of what makes living in the house such a unique experience, but that history doesn’t make the house any less welcoming,” said Chloe Shantz-Hilkes, an O’Keefe alumnus who lived at the house from in the 2008-2009 school year.

After O’Keefe’s death, the house was converted into an office space for Longman’s Publishing before it was eventually sold to Ryerson University in 1963. By autumn of 1964, the O’Keefe House was transformed into a residence for the university’s students.

Besides being a historical landmark, the people that live and have lived within the house make the building into what it truly is today.

Since Ryerson is mainly a commuter school, students have other commitments they tend to, like work or school. Because of this, many students find it difficult to participate with all the on campus events that Ryerson hosts. But not O’Keefe residents.

Students that live in O’Keefe can be spotted at any given Ryerson event. Whether it be decked out in blue and yellow cheering on the Rams, or contributing their time and energy to a charity event, they have the ability to support and participate in on-campus events in ways other Ryerson students can’t.

The residents of the O’Keefe House are also avid participants in Ryerson intramural athletics. Most of the students play both dodgeball and volleyball, and love the sense of community it gives them. 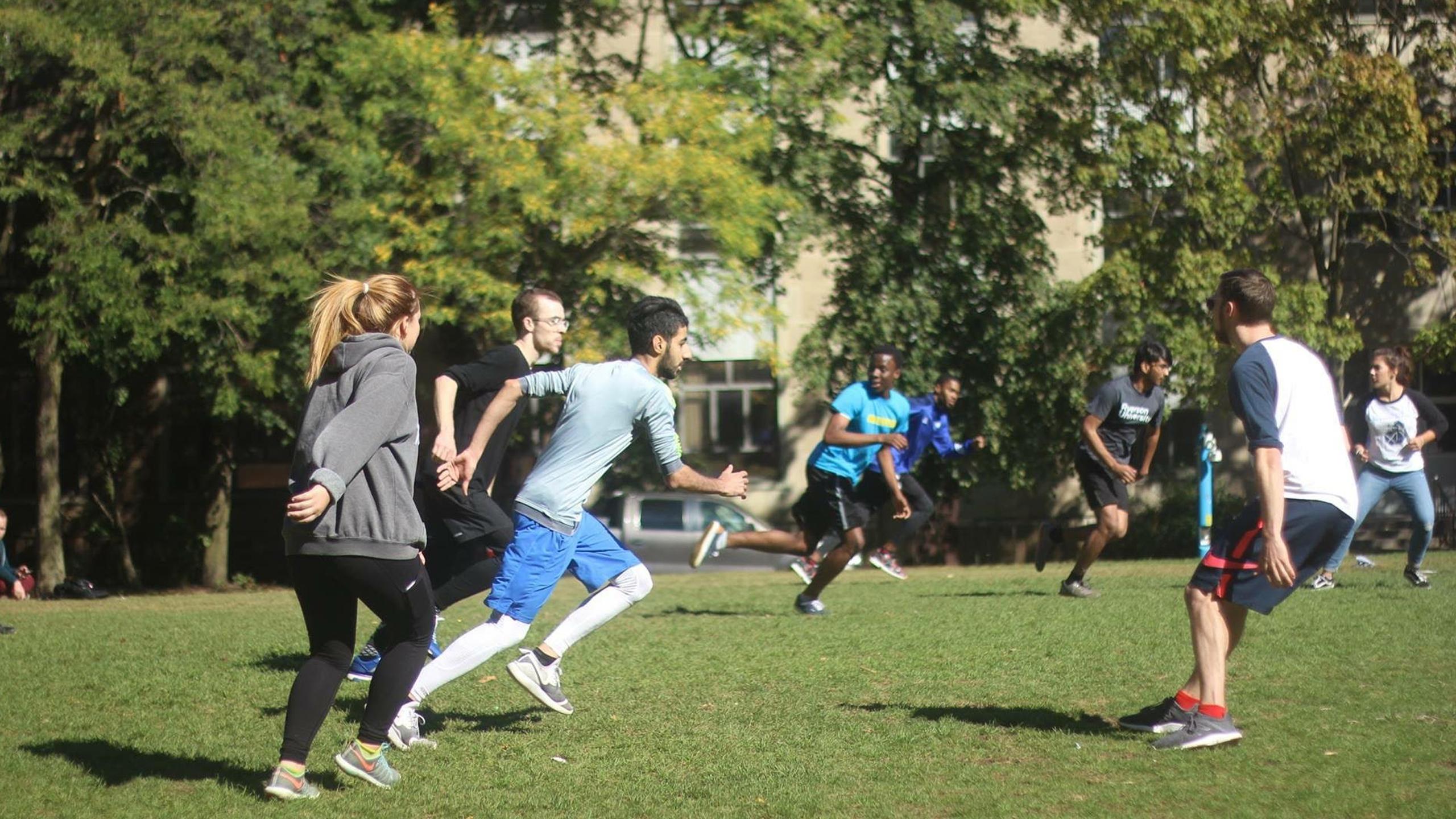 Some of the house residents playing in the O’Keefe alumni football game in September Photo: Priyangsha Chittaranjan

“We’re already so close in the house, there’s literally zero privacy” said Fares El-Koka, a first-year business management student. “But when you’re suddenly put in a team setting, it really brings everyone closer together. We always have a good time participating in these kinds of activities.”

A gavel is passed around at every O’Keefe “house meeting” that is awarded to anyone who has done a good deed for the current owner of the gavel. The residents said that it helps them promote positivity and acts of kindness and it’s been passed down as a tradition from past residents of the house. According to the alumni, the rules state that anyone who drops the gavel will be cursed with bad luck. 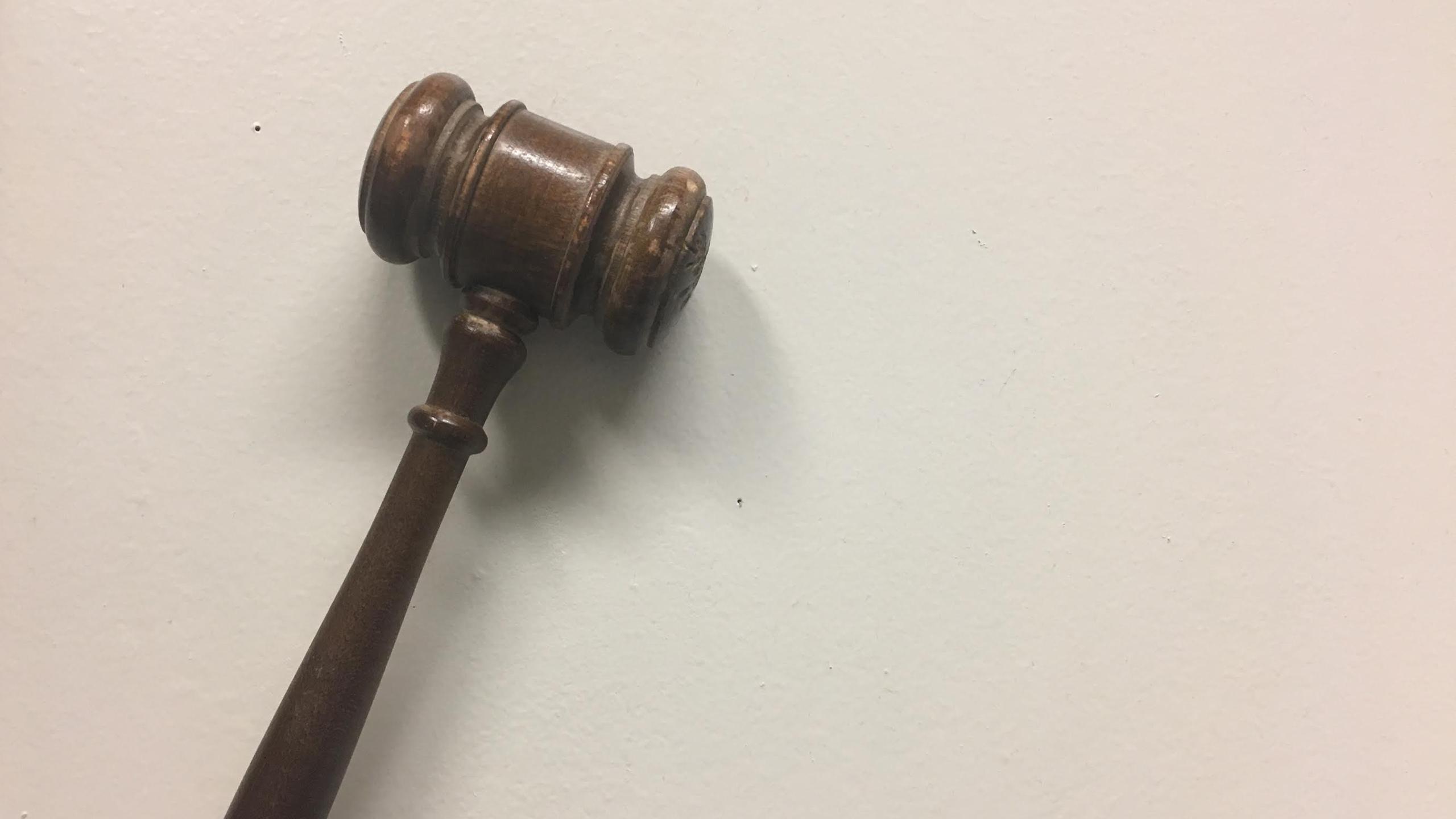 The gavel is passed around at the house meeting to anyone who has done a good deed. Photo: Arianna Kyriacou

In addition to the gavel, the O’Keefe House also plasters colourful and themed murals all over the basement walls as a tradition. At the end of every year, the residents create a mural in the basement to surprise the house staff with.

Even though the house will not be used as a residence for the upcoming school year, the residents will still be able to participate in the mural-making tradition—the last O’Keefe mural ever.

“I’m so excited that we still get to create the mural, it’s such a big part of O’Keefe’s tradition,” first-year RTA student Claudia Coppola said. 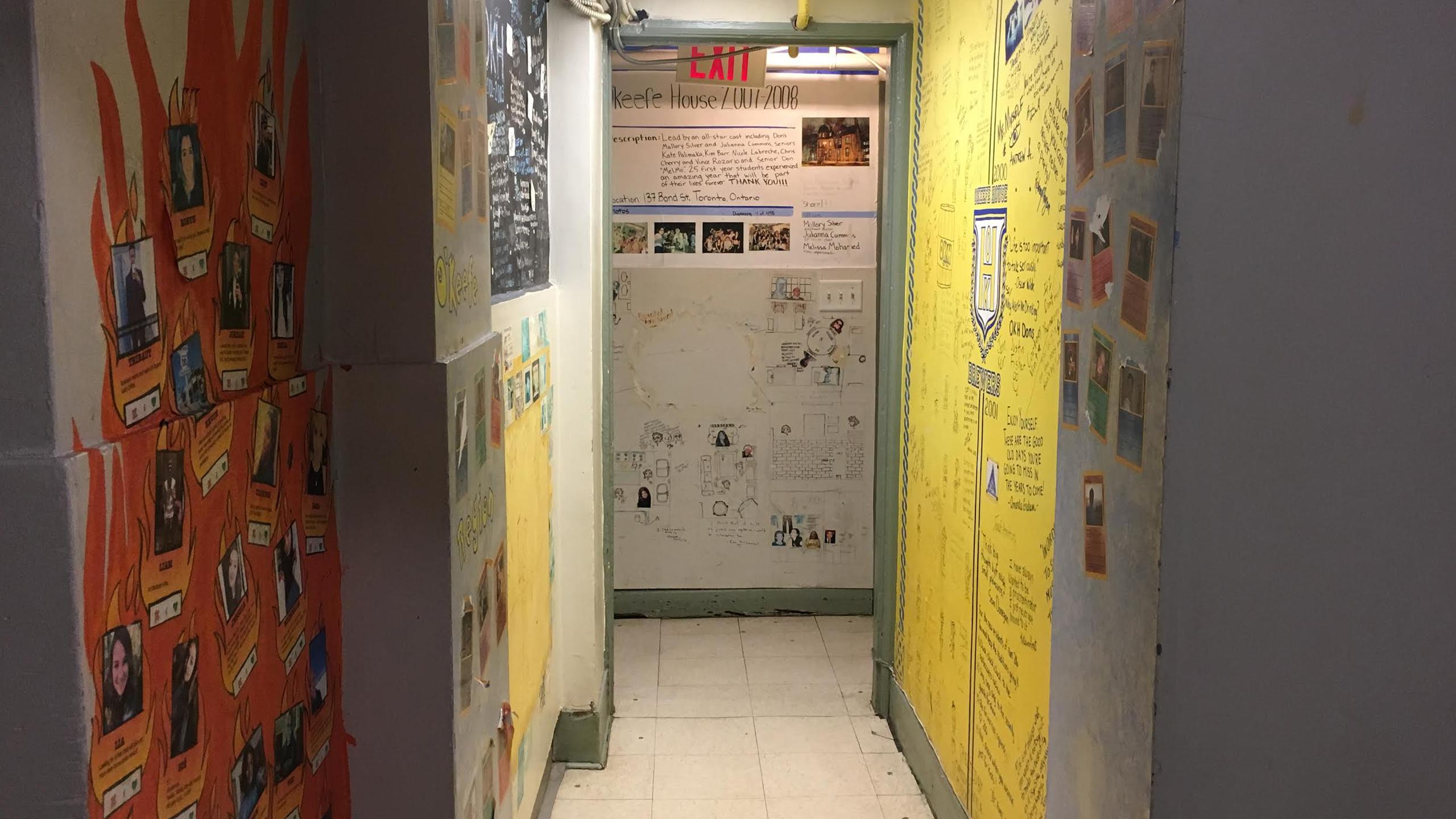 The basement of the house, where some of the murals that past students have created are displayed across the walls. Photo: Arianna Kyriacou 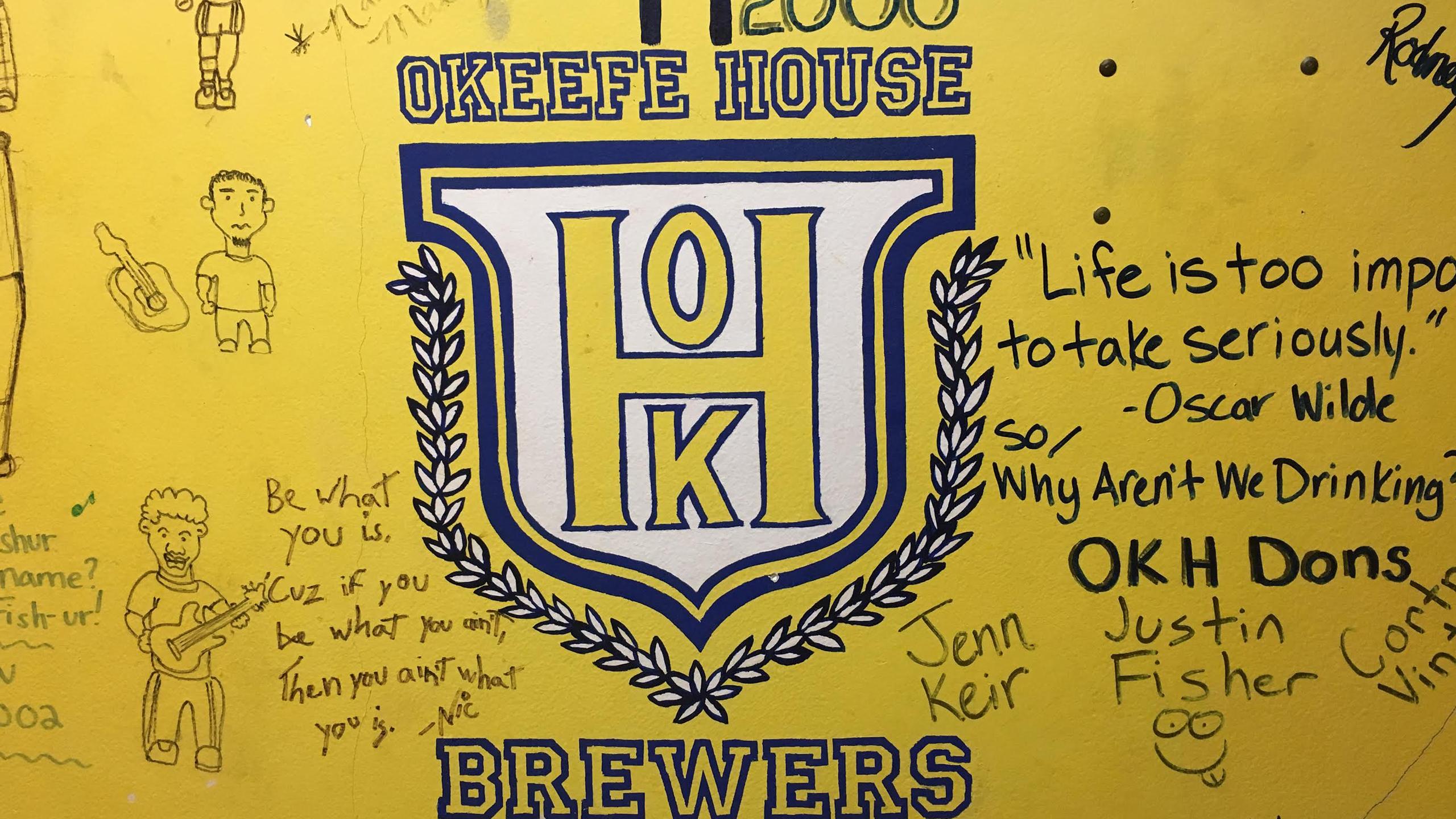 The residents are extremely close, living in a different environment than those in other residences like Pitman Hall or the International Living and Learning Centre. The house consists of three floors of double and triple rooms, where the students sleep in bunk beds, which is unique to O’Keefe, compared to the regular beds that the other Ryerson residences provide.  Each floor is equipped with one all-gender bathroom and a small kitchenette. The only common room in the house is the basement, which also consists of the only full kitchen.

“We go out for dinner a lot as a family and overall just spend all of our time together. There’s always something happening in the house so it’s very rare to just be cooped up in your room all day,” said Erica Antonitti, O’Keefe house president and first-year business management student. “Living in such a small house with a bunch of people almost forces us to be a family. We’re all so close and it’s almost impossible to not know anyone in the house.”

In an email obtained by The Eyeopener, Erin Macdonald, Alumni Relations Officer stated that because of the addition of the HOEM residence, Ryerson’s newest residence set to open in fall of 2018, the O’Keefe house is no longer a viable and sustainable source for student living. “While we are grateful for the number of years the building has served the Ryerson residence community, it is now time that it serves the community in a different manner,” Macdonald said.

Although it’s not clear as to what the space will be used for in future years, no one will sleep in an O’Keefe bunk bed ever again, or walk past the basement murals in awe or pass the gavel down to the next cohort of residents.

To O’Keefe’s current and past residents, the building is not just student housing—it’s a home. With all its old-fashioned architecture and cozy atmosphere, the house itself has immense personality and charm. But it’s is much more than just a piece of history situated on campus.

As a resident of the house, I was shocked when I was offered a room, since O’Keefe was my absolute last choice on my residence ranking. However, moving into the house in November 2017 changed my mind. The traditions, history, and community within the house is unlike any other residence.

O’Keefe, you will be missed.